Amogh Symphony welcomes The Fountainhead as the new addition 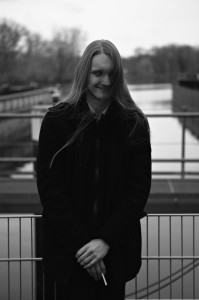 We welcome Fretless Guitarist/Oud Player/Producer Tom Geldschläger aka The Fountainhead from Berlin, Germany as new addition to Amogh Symphony. Tom replaced Drummer Jim Richman who had recently quit the band (We are planning to do some side projects together with some other deadly musicians).

“I´m thrilled to be joining “Amogh Symphony” on their upcoming new album and onwards. In my humble opinion, they are one of the most unique, inspiring and flat-out fun bands in the world and I´ve been a total fan ever since I was first introduced to Vishal´s work and thus AS by the getting to work with the man himself on one of Jimmy Pitts´s albums (whom I also work with in the Pitts/Minnemann Project). Since then, many collaborations between Vishal and me and subsequently Andrey ensued. Having had already contributed a guitar solo to one of the new songs, I didn´t have to think twice when Vishal asked me to join him, Andrey and Derick on all of the new material, which is shaping up to be absolutely amazing and I can´t wait for all of you to hear what we´re cooking up! I´m always trying to put myself in musical situations where I feel challenged and appreciated in equal measures and, most of all, where I have the opportunity to learn from people who are masters at their craft and I feel that joining Amogh Symphony provides that in spades. Love & Light, Tom.” – Tom

Tom and i did our first ever collaboration together in the album Galaxy Mechanics of the Jazz-fusion/Progressive Metal Super-Group called The Fractured Dimension, fronted by extraordinaire American Keyboardist and Music Composer Jimmy Pitts and excellent Bassist Jerry Twyford. Supported by German Drummer-par-excellence Hannes Grossmann. Jimmy introduced me to Tom’s alter-ego The Fountainhead in 2014 and i was shocked after hearing him play. Another best thing about Tom is that he is highly spiritual and enthusiastic about Indian Classical/Shashtriya music and Vedas (so Andrey has a company). Tom and i collaborated later in a Remixed Fountainhead song called “Hitherto” which is my gratitude to Legendary Guru Guitarist Jeff Beck. Tom also recorded guitars recently in My Atomic Majesty, a side project of Andrey Sazonov

At this moment, I can only tell that Sound Designer/Electronica Producer/Singer Derick Gomes(who joined us in 2015) and now Tom are so far the best additions to the band. We are very happy with the tracks. Tom is currently recording his parts. As of now, I am playing/writing/recording all the Drum parts by myself in this album.  All my guitar parts are completed and Tom is adding his own magic now. Super thanks to my Mom Kasturi Nath Singh for allowing me to record her beautiful devotional and tribal vocals. Some of these contents are very ancient and spiritual and it was one of my dreams to turn them into something different by arrangements and additions. This album has two sets – Side A and Side B. Side A has all the instrumentals. Side B has vocal oriented songs sung by me, Derick and Andrey. It will be sent for Mixing and Mastering in April last week. We hope our fans will enjoy this record.

A lot more exciting updates coming soon! Watch this space.
Now join us on Amogh Symphony Facebook Page and catch me on Instagram (Since it’s a trend. Hmm)