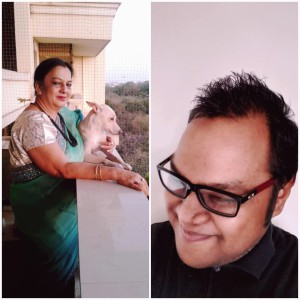 Based in Mumbai, Kasturi Nath Singh is a poetess, writer, singer and music composer. Started music at the early age of 7, Kasturi was classically trained under her mother Late Labanya Prabha Nath(Assam’s first female Multi-Instrumentalist, Singer and Composer recorded by Megaphone and HMV in 1935-1938) and Classical Singing Guru Late Paresh Roy. Among 7 siblings (all musicians), according to her older brother Prasanta Kumar Nath (renowned and respected Music Composer and Multi-Instrumentalist, Former Auditioner of All India Radio) – “Kasturi is the most versatile musician among all of us in the family with such varied taste in music. She can sing any style of singing and she can sing any song.”

Initially, Kasturi started as a dancer of varied styles namely Kathak, Manipuri, Durga Nritya etc. She started performing and singing on stage at the age of 11. After marriage and giving birth to her two children (Vikram J.Singh and Vishal J.Singh), she decided to dedicate her life to family for 15 years. In between, she performed in few venues along with her bandmembers but also found her deep interest in poetry and writing about spirituality and ignored social-issues. In 2000, her first book on spiritual development in Assamese, entitled “Progotixeel Jibon, Mon aru Vyoktitvo” was published and received appreciation from everywhere (An English translated version is in the process). A very caring Grandmother of two lovely Grandsons, Kasturi is also involved in social welfare programs with associations like Lekhika Sanstha, Sahitya Sabha, Lady’s Club etc in Assam.

In 2016, Kasturi entered the world of film music with her soundtrack and background music collaboration in New Jersey based Filmmaker Vijit Sharma’s debut feature film “Mirror Game”. This film soundtrack is also her first appearance as Playback singer. The film won many awards in US and received great feedback for it’s atmospheric background music and Rock soundtracks(composed by her son Vishal J.Singh).

Q.1 What role did your mother play in you entering/taking up music?

Vishal: She encouraged me to study music and art very openly and deeply. Mom never forced me or my brother to do things in life. Even till date, my nephew asks her – “Why aren’t you yelling at me, Grandma? Look, i messed things up.” And she replies – “Some mistakes are beautiful creations by accident. Observe.” In fact, we never heard or saw her yelling and shouting since we were kids(laughs). She told me to listen, observe and appreciate all kinds of art and music and how open-mindedness in thoughts and personality directly reflects songwriting. She helped me understanding the routine life in a super busy schedule. She is very open minded and takes things positively with laughter. Let me tell you one example – My grades in 10th exams were not so good. During a gathering session at Lady’s Club, where all other women were talking about grades and great marks of their children, when her friends asked her “Why did Vishal score so low in his exams? Aren’t you afraid or angry?” She responded politely with a smile – “Well, he isn’t a baby anymore. It’s his life and let him do what he wants to do in his life. If he wants to be a failure, let him be. If he wants to become something else, let him be.” and people were silent.

Q.2 What is the fondest/earliest memory you have with your mom that involves music?

Vishal: Sometime during last year i think? Yes. We were in a jam rehearsal in Churchgate with some very incredible musician friends who came from Sweden. My friend Olivia(an amazing Swedish folk-jazz singer) invited mom to be a part of this jam because Mom has an amazing sense of on the spot improvisation(she is also a one-clean take recording artist). The idea was to record an unplanned improvisation while having ear and eye contact in the jam. I do not overpower or play too many notes when i play the role of Conductor. The fun part begins here – Before mom’s vocal improvisation and poetry section, i had to play a long guitar solo improvisation to join mom later in a commonly known Assamese melody for a guitar-vocal unison. While observing me playing the guitar solo, Mom politely sang these words in counter melody while making funny faces –
“Laa laa…..why are you playing fewer notes? Are you retired and old?…laa laa laa…how about many faster notes…that thing you called shred?..don’t beeeeeee laaaame…la la”
I remember, the very next round, i had to play too many notes to get the right facial expressions from her and everybody in the room(including myself) were laughing out loud while playing their instruments at the same time.

Q.3 How do you connect with your son Vishal both as Mother and as Music collaborator?

Kasturi: (Translated to English) As a mother, i believe in total freedom and the never ending self-learning process for Vishal. I didn’t force him to learn music. He discovered his love for music at my Mother’s house when he was 5 or 6 years old. He is mostly self-taught and he stunned all of us with his natural born talent. Whenever he needs guidance, i try my best to guide him but just because he is my son and i love him so much, i don’t force-feed him with my own personal beliefs and ideologies. I grew up in a family with 4 protective yet caring musician brothers who taught me about lifestyles of artists and musicians but it was my late husband Jitendra Singh who guided me to accept and value my own art and music. There is an unconditional love that speaks more volume than conditional love and it helps the person you love to grow naturally. Vishal is a beautiful combination of my musical roots and my late husband’s intelligence in science. We observed Vishal understanding, listening and reflecting sounds and music very differently from all of us. He also thinks very differently from other kids in the family. We both knew that he will find his own path which will be very different from ours. I just made sure that he finds enough confidence within himself.

As a music collaborator, we both learn from each other. He is like a 50 years old Grumpy Dad and i am like a 14 years old excited daughter *laughs*. When Vishal was a little boy, i introduced him to Indian and Western Classical music. Now, that he is all grown up, he introduced me to World music, Rock, Jazz, Progressive Rock etc. I also love the company of young musicians(Vishal’s friends) who equally treat me like their friend and we discuss about new music. Last year, i really liked Radiohead’s new album and asked Vishal to get one copy for me. It inspired me to compose some melodies on Piano keyboard for a film soundtrack. I would like to mention that recording vocals with Vishal is very motivating. He doesn’t use Autotune and especially in my case he says – “I want you to sing each and every take so perfectly that i do not have to edit anything out. Imagine, this is a 2 track recorder and we are back to 1970’s approach of recording. Auto-tune doesn’t exist”. Sometimes, he gives me almost impossible melodies to sing. When i ask him why did he compose such tough vocal melodies for me, he replies – “You’ve been singing much more complex melodies since i wasn’t even born. Listen to Prasant Mama(his Uncle)’s melodies. His notes are like Angels flying from Norway to Japan but suddenly lands on India.”

Q.5 Do you have any message to all the Mothers who are reading this?

Kasturi: (Translated to English) Wishing my sisters, friends, daughters a very happy Mother’s Day. Motherhood is a beautiful gift from God to women. Love your child but try to understand your child’s emotions right from early age. Be your child’s best friend and make your child free and comfortable enough to share inner thoughts. Listen, pay attention and observe each and every movement of your child and do not correct your child by yelling or shouting violently. Please don’t force-feed your child with your own personal beliefs and ideologies. What you give in past is what you get in future. May God bless us all.